Ggnitaly84
Florence, Tuscany, Italy
From Texas, I do not own shortgun, pickup truck, or support George W. I left for LA when I was 18 for 5 years, taught english in China for a month, and now I've ended up via fate in Florence, italy .So I suppose you can assume Im a bit of a vagabond or a gypsy..or as I like to think..just curious :).. My passions include sarcasm, laughter, good friends and new wine.. and giddy feelings of excitement :P

So tea and taxes…goes together like 1776... And has nothing to do with my taxes but hey it was a nice attempt.. .so the day that I have been dreading has finally a come.. A nice fat envelope from god know who, perhaps Berlusconi himself with my tax bill. Since we have done all of the paperwork for my “colf “ visa , the only thing that has come in time is request for taxes.. LOL.. Its kinda funny but not really. I still don’t have an appointment for my permesso ( identity card) but yet they have already received EU500 and now an additional EU700... No small sum for a “colf” eh?


I have no problems paying tax as LONG as I see (some) return… or I threaten to emigrate to Denmark where they have the highest taxes BUT they actually use their tax revenue for the people, and do it well! They have one of the least income disparity among their people, health care is highly rated , education is free and there is low unemployment.. Unlike il bel-paese and my own “wealthy” nation.. So whets better to have folks , a place that seems to tax the sh** out of their people but uses the money wisely or lower taxes and the “possibility” to make something of oneself through self-motivation and hard work.. At this point I’ll take the latter.. Per-favore! I’m a pretty motivated person but geez I’ve had so many lemons handed to me in 2009 that I’m sick of making lemonade!

So what did I do.. Pay the damn taxes and wait,hope,and pray that I will have my appointment soon and then I can change my permesso to an independent work visa.. But we shall see.. One step and tax at a time!

The reference to my social life was that *gasp I almost have too many plans! I have been doing research for Venice carnival and have ALWAYS wanted to go but Venice is expensive and I just paid taxes lol.. Sooooo low and behold I and some friends will be tagging along with the European ( Erasmus ) Aeegee organization to Venice for the day on Feb 13th and paying just EU30! that’s a 1 way ticket to Venice via trenitalia! We’re also going to a “castle “ party where you pay 20 euros and there is an open bar and a flower themed party! Whatever but I am sure it will be fun to get out of the center and party Italian style.. This week we’re meeting up with a Columbian- Italian friend who is crazy fun at our favorite bar for some good times and Saturday is “sex and the city” night with me and some good girl friends where we hit the town with style.. Cheesy I know but I need an active social life.. I’m 25... I live with my boyfriend and his parents… get me outta here! Lol just kidding! Plus I want to enjoy the most of these friends who probably will leave as Florence alas.. Is not an easy city to find work in.. so for now I’m snuggled on the couch with T-man watching a movie about a man in Prague obsessed with his girlfriend… http://www.wisevid.com/play?v=1tbfA5g86tbc. ( the link) .. 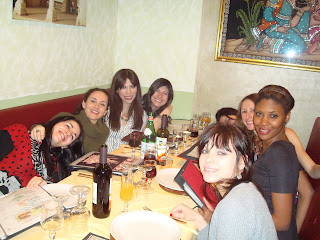 Indian night with the ladies... too much wine! ( if that was ever a problem!) 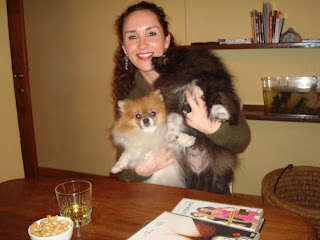 My friend Madeleine and her bears/pups! I tried to kidnap one but it didn't work.. 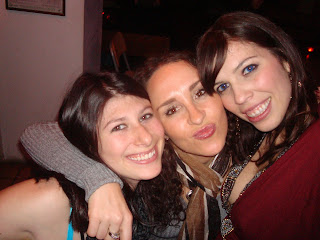 sex and the city night part 1 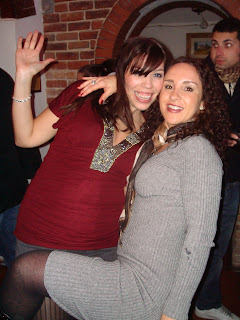 part 2...let the craziness begin and it did